Irene was born on the 23rd of November 1939 in the Limburg town of Weert (The Netherlands). Together with her two sisters she grew up in a harmonious and artistic family. Undoubtedly Irene inherited her creativity from her mother, who wasan accomplished photographer. Irene played the violin well and was a member of the local symphony orchestra. She liked animals very much and as an adolescent girl she already had her own horse. She attended grammar school in Eindhoven and in the evening she went to the School for Industrial Design. 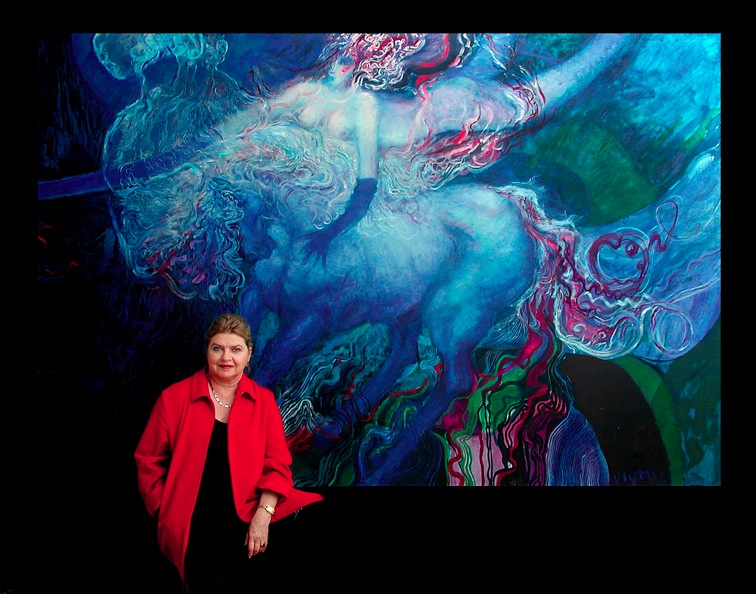 A great talent is formed

After grammar school Irene studied art at the Stadsacademie [City Academy] of Maastricht, which was the beginning

of her career as an artist. At that time she also took summer painting courses in Segovia, Spain, where she learnt the Spanish language. After that followed three years of Amsterdam Rijksacademie [State Academy], studying with Professor Röling, to be succeeded by one year at the Antwerp Koninklijk Hoger Instituut voor Schone Kunsten [Royal Higher Institute for Fine Arts]. In 1965 her dream came true and she left for Spain.

Spain, the land of her dreams

Irene had always been in love with Spain. The sunny climate, a country with a grand culture, the Mediterranean atmosphere, and the melodious language; all of these things held a great charm for her. Spain was to become her adopted country. In Madrid she studied at the Real Academia de Bellas Artes San Fernando. There she specialised in the monumental arts, especially the painting of frescos. After a strict preselection, and as the only foreigner she was allowed to participate in a great national exhibition in which all of the Spanish painters were represented. And in 1966 she had the first exhibition of her own, which was opened by Princess Irene. The Spanish press was wildly enthusiastic. In 1967 Irene married a Spanish estate agent and property developer, Alfonso Fernández Nieto. They had three sons, one of whom moved to America and the other two opened a charming hotel and restaurant in the hills above Malaga, Hotel Villa Guadalupe – Restaurante Amador.

In the following years she created frescos in the Netherlands and in Malaga. Also she began to design jewellery,

something she had always wanted to do. She made the designs and had them executed by the famous Spanish

jewellery designer Rodolfo Navarro. As she was curious to know if this jewellery would catch on with the fairly critical

Spanish public, she took part in the great jewellery fairs of Valencia and Barcelona and it was a success. Up to the present day Rodolfo still makes jewellery designed by Irene. In the mid-seventies she had a request from an American art consultant to start selling her paintings and jewellery in California. For a couple of months she commuted from Malaga to California and in the meantime did some study trips to places such as Scandinavia. In 1984-85 she had an exhibition at the Arco art fair in Madrid showing fresco panels, paintings and jewellery. This had a resounding success and she made the front pages of all the influential Spanish papers. In 1983 the first book about her work appeared written by the

Spanish poet Salvador López Becerra. The number of exhibitions increased greatly by now. These exhibitions were held in Spain, in New York, and at the Modern Museum of Art in Santa Ana and the Nelson Rockefeller Collection in

Costa Mesa, the latter two in California. In 1985 a book about her was published in the series of Great Spanish

Painters. As the only non-Spaniard this was a great honour for Irene.

Yasuhiko Sata. This very special and enthusiastic person was impressed by Irene’s work and the two

of them became friends for life. He told her that he had bought a beautiful old castle in the Côte d’Or in France,

the Château de Chailly. He intended to turn it into a top luxury hotel and for the north tower he had something

else special in mind. Irene got the honourable assignment to carry out this project. She was given carte

blanche and thus the Dôme du Cosmos came about. This was Irene’s magnum opus, a monument of intense reflection, of silence and wonder, of bliss, of contact with the divine at the highest level. All religions fuse here. Playful shapes, little fountains and an incredible abundance of shades and tints in frescos and mosaics make that you know yourself surrounded by the totality of the cosmos. This is experiencing supreme beauty. The Dôme du Cosmos is a jewel of

plastic art and a donation by Sata to future generations as it is not yet open to the public. It is the finest project

ever done by Irene. She worked on it for well over two years and it contains 300 square metres of frescos and

250,000 tiny glass mosaic tiles, all within a Chapel of this lovely castle.

Meanwhile Alfonso had built a gigantic manor farm of Castilian style. It was a finca in the hamlet of Chinchilla de

Monte Aragon in the province of Albacete. A lonely, quiet place in wild and rugged scenery. The building complex

consisted of many rooms, a courtyard with stables and outhouses, a tower with a private chapel, a library, and a large

studio for Irene. El Ojuelo even had its own power station that might supply a sizeable village with electricity. Irene was

absolutely happy here. Here she could work undisturbed at her creations or prepare them. She made the most beautiful frescos and mosaics for the rooms and she also designed the tables, the furniture, fireplaces, a fountain

and the carpets. The Pyrenean-Romanesque private chapel was as well designed by Irene. Apart from the many frescos

she created here a beautiful Madonna in mosaic: La Virgen de Ojuelo. In 1991 she got the honourable assignment

Château St. Gerlach with her frescos and mosaics; with the Madonna of St. Gerlach as the dominant figure.

In that same period she as well beautified the Karel V Grand Hotel in Utrecht. This was an age-old property originally

owned by the German Order. Here too Irene created impressive mosaics, ceiling paintings and frescos and

It is a sign of great and compelling craftsmanship that Irene made all her paints and varnishes herself.

Dazzling are the tens of large glass jars with pigments, among which two precious age-old authentic Caput Mortuum

pigments from Egypt. There are hundreds of little baskets full of tiny mosaic tiles in all sorts of colours.

These glass “small stones” come in two sizes: 1 by 1 centimetre for 24-carat gold and 1 by 2 centimetres for all the

other colours. There is only one address at present where these small glass stones are made: a small, very old glassworks in Venice. The glass blower adds a certain pigment to the molten blob of glass and turns this into a flat “pancake”.

After that the two sizes are cut with a glass cutter. Each tiny mosaic tile is a unique specimen. In the

Middle Ages they were able to produce as many as 1500 colours. In the present day this has reduced to a mere 120 colours. Irene was the only one in the whole world who still made mosaics in the artisan way following the age-old methods. Thanks to her enormous stock she could work with 350 colour combinations.

And then it became 2001. Irene and Alfonso were on their way to Madrid where a major Picasso exhibition was being held when Irene felt unwell. After many medical examinations and operations she was diagnosed with an incurable disease. Six years of physical suffering followed. But Irene’s greatest sorrow was that she would never be able to work again.

No more creative outbursts, no more going up the high scaffolding to paint her frescos, no more up the ladders with

buckets full of heavy mortar to make her mosaics. She had been asked by Mike Sata to decorate a grand

peace monument in Nagasaki with her frescos and mosaics. But that was not to be. On 1 September 2007 Irene van Vlijmen passed away. The great shining light of her creative power was extinguished. And she began her long, long journey towards immortality.

Irene will stay with us

All over the world Irene van Vlijmen has left her masterly creations. A generous wealth of poetic shapes and colours

originating from that inexhaustible Mediterranean source, an endless range of fantasies, a constantly changing abstract

blend of surrealism and expressionism with which she has enriched art worldwide. Today we pay homage to a really great